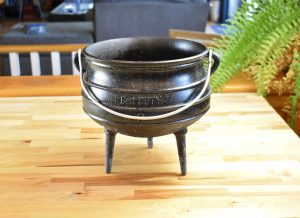 Potjiekos (pronounced ‘POY-kee-koss’), translated literally from Afrikaans as “small-pot food”, is a special South African style of cooking using a potjie (pronounced ‘POY-kee’). A potjie is basically a cast iron cauldron on three legs with a lid, combining the benefits of a cauldron with those of a Dutch oven. Potjies were brought over with the Dutch in the early days of South African colonization and were used by Voortrekkers (Dutch settlers avoiding British rule in the southern Cape by moving east into the interior by wagon) for their daily meal. Meat, most often game, was thrown into the pot, along with any available vegetables, and cooked over coals while camp was set up. Bones were thrown in as well, both for flavour, and extra nutrition. Every day, the leftovers would be packed up, still in the pot, and new meat would be added that evening, creating layers of flavour. The potjie could also be used like a Dutch oven to cook bread, or as a cauldron hanging over open flame to boil water for washing, making it a very useful tool for the Voortrekkers.

Local African inhabitants traded with the trekkers for potjie pots to replace the clay pots they used and began to use them extensively in their cooking as well, calling them putu pots. They would most often cook pap, a type of corn porridge, in them, giving rise to the famous putu pap dish known by many in South Africa.

A long tradition of potjiekos evolved in the region and it is still popular today with potjie recipes abounding. Potjiekos and South African braai (barbecue or grilling) go hand in hand and are part of most outdoor social gatherings in the country.

Most often some sort of meat is used; lamb, beef, chicken, or game (though there are recipes for seafood and vegetarian potijiekos), as well as traditional vegetables like marrows (aubergines/zucchini), mielies (corn on the cob), potatoes, mushrooms, carrots, and butternuts (squash). The meat is always added first, then the vegetables are layered on top in order of how long they take to cook.

One never stirs a potjie! The layers always remain fixed, and this is what separates potjiekos from a stew. Using long cooking times over low heat from the coals, the contents of the potjie should be tender, soft, and full of flavour.

Potjie pots come in different sizes. The one I used for this recipe is a #3, which is a medium pot, and more than enough for any normal sized family. If you plan on feeding large groups, you may want to get a larger one. The numbers will always be stamped on the lid. There are also rings around every potjie. These will tell you how many people you can feed by multiplying the number of rings with the number of your pot. If you fill the potjie to the second ring, then multiply it by 3 (since I have a #3 potjie), you’ll end up with 6 servings. Fill it up to the third ring and you’ll have 9 servings. Pretty cool, huh?

If you’d like to purchase one (you mean you don’t have a generous sister- and brother-in-law that lugged one all the way back from Johannesburg for you?!), the best place to look is online.

Read on to see my South African Lamb Potjiekos recipe! 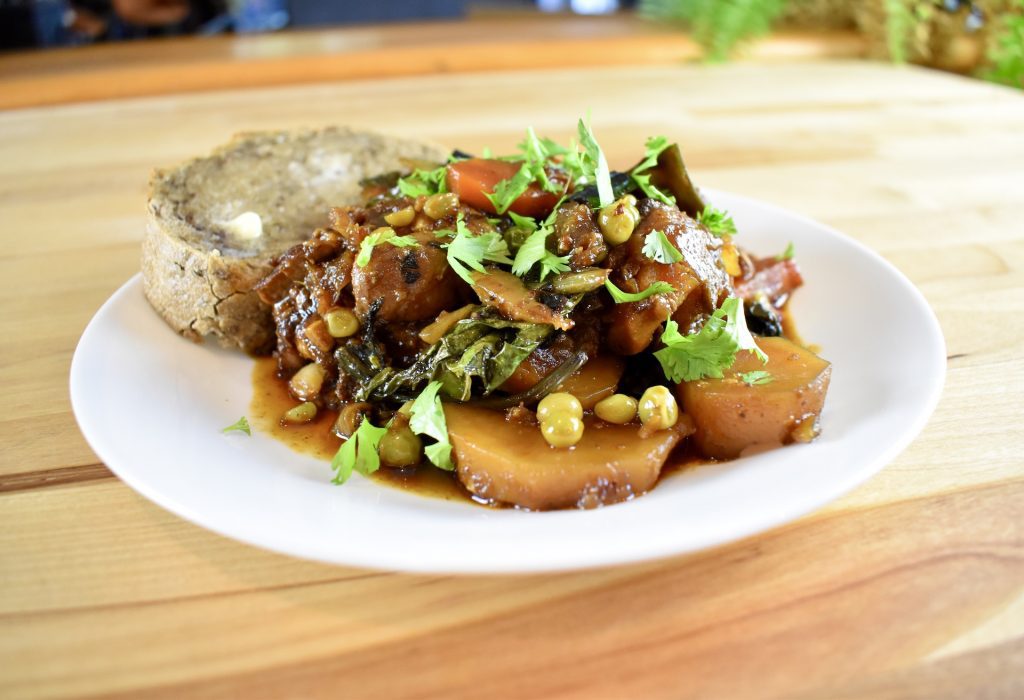 This is my version of a South African potjiekos meal, made with lamb and some fresh herbs and veggies I had available in the garden.

You can however, use any red meat you’d like in this recipe, as long as it is from the shank, rib, or shoulder area. Venison would be amazing, but so would beef or pork. The vegetables are totally interchangeable too, just be sure to add the heartier vegetables in step 7 and the less-so ones in step 8.

I recommend either setting up an outdoor table to chop your vegetables on, or pre-chopping and pre-mixing all of the ingredients and separating them by what stage they’re added (ie. chopped potatoes, eggplant, and carrot all go into one container, spices all go into another), and bringing it all out to the fire with you.

This is an all-day affair, so make yourself comfortable, put on some music, and crack a beer, hopefully with some friends. To make it a true South African potjie party, those friends should be offering constant unsolicited advice on what you should or should not be doing while cooking the potjiekos! 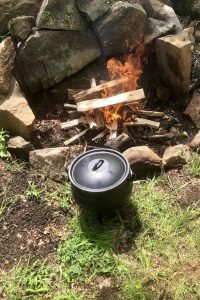 Make a large fire and let it burn down to coals. It is best to keep a fire going in one area (to replenish the coals) and have a second area to cook the potjie. 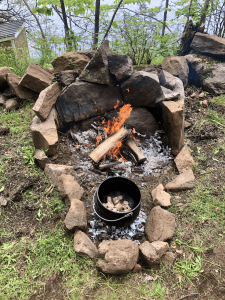 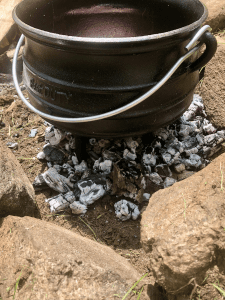 Once you have some nice coals ready, drag them out of the fire into a small pile and place the potjie over them.

Make sure you follow instructions for how to clean and cure your potjie if this is your first time using it. 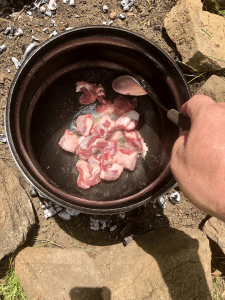 Add the oil to the potjie and let it heat up until it begins to smoke slightly.

Add the meat and cook, stirring, until it browns, about 15 minutes or so. 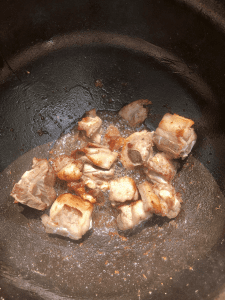 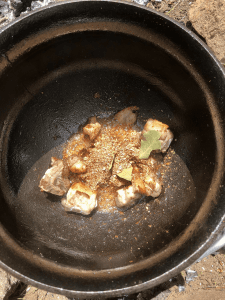 Add the spices to the brown meat, then add the onions. Cook, stirring, for another 5 minutes or so. 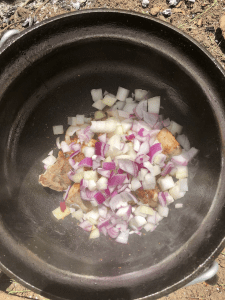 Add the tomato paste, ginger, and garlic and stir it all in. 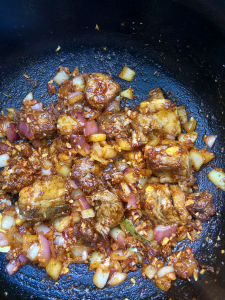 Cook for another 5 minutes or so. 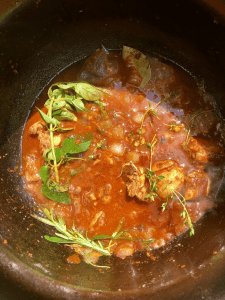 Add the herb sprigs if using, then add the broth. Give it a bit of a stir. Now throw the spoon away as that is the last time you’ll stir this thing!

Cover the potjie and cook for 2 hours. You’re aiming to cook this nice and slow and gentle, so be mindful of how many new coals you add. You want it at a nice low simmer, so only add a couple hot coals at a time, then let them slowly burn out. You can get a bit of a sense by the steam (or lack thereof) escaping from the lid, or the sound of the pot bubbling.

Try not to lift the lid right off. If you need to check to see if you need more liquid (mine did) take a quick peek by lifting one side of the lid. If it looks like the liquid has all evaporated, add more water or broth by pouring it down the sides of the potjie, never in the middle. 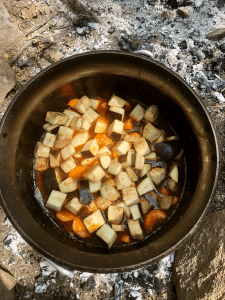 After 2 hours, take off the lid and add the eggplant, carrots, and potatoes. 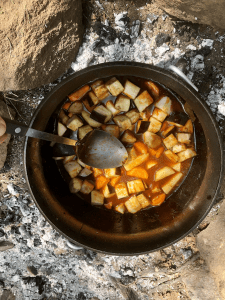 DO NOT STIR! You can press the vegetables into the liquid a bit though.

Cover and cook for 1 more hour. 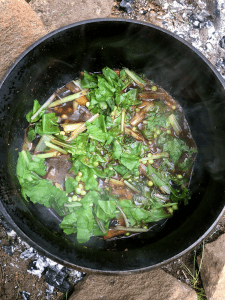 After an hour, take off the lid once more and add the peas and greens.

Cover and cook for another 15 minutes or so. 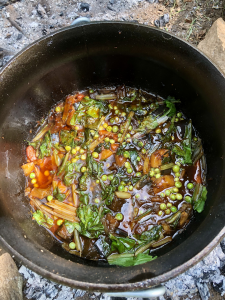 Take off the lid and cook for another 20-40 minutes, or until the liquid is mostly evaporated and the sauce thickens. Remember, don’t stir this or I’ll be very very cross with you! 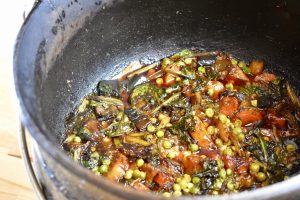 The potjiekos is finished!

Spoon it onto plates or into bowls and shower it with fresh herbs. Serve with bread, couscous, or rice.

Make sure everyone gets some of everything in the pot! 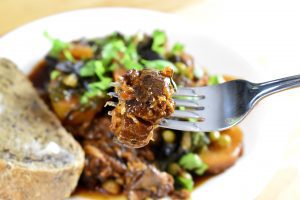 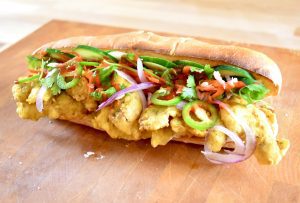 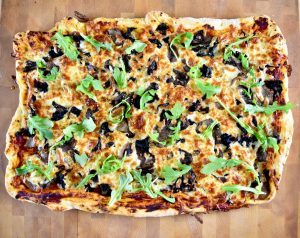 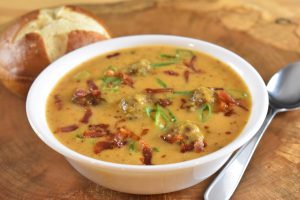